ANIMALS OF THE NORTH

Mammoth is apparently the most legendary mammal in the prehistory. The most common place connected with the early people and these giants are the settlements in Moravia and some nearby areas. In the period of Gravettien culture, the early people used to hunt mammoths and other animals just in this area.  At the end of the 19th century, an enormous amount of mammoth bones was found here and made this area famous. In the findings of the moravian Gravettien culture, many sculptures and art works of these attractive creatures were found. The same popularity gained mammoths across Europe and Asia. Anatomically, mammoths were very well adapted to the cold climate. That could be documented by the engravings, on which we can see the direction of the hair growth. These purely documentary graphics of the early people can be trusted, because next to the engravings of mammoths we know the engravings of horses. The direction in which the hair is pictured on the graphics is the same as the direction it grows on today´s horses. This makes the reconstructions to a reliable picture material. Therefore we shouldn’t call them reconstructions, but rather improved drawings of the early people, the fellows of mammoths. The hair on mammoths head grows downwards, which is the main difference from the fantasy paintings, on which the hair forms some kind of shag (the paintings of Zdeněk Burian, mammoth Manfred in Ice Age movie).  We also know such details like proboscis-end or the shape of the tail, which created a sort of clack-valve above the anus to protect the sensitive area for cold. The always frozen soil enabled the preservation of individuals with rest of tissue and hair. The whole grown mammoth hadn´t had many chances to end up in such ideal conditions for congealment, but the young ones had. One of them was wound in the second half of the 20th century. A whole well-preserved mammoth is of course a fiction.

Mammoths were hunted not only for the meat, but also for bones with pith, fat that could be used as heating fuel, fur and also for the ivory, which was used for art subjects. The mammoth remains in Moravia were treated with respect and the bones weren´t left on the place of slaughter, but brought to the settlements like trophies. In some areas, huge amounts of bones was found; in Předmostí u Přerova were gathered remains of thousands mammoths. The frequency of the hunting is unknown, we don´t know how often the early people hunted in relation to the colonization. In these localities, the early people hunted grown-up male animals, while on later sites such as south Moravia and Milovice, younger individuals or elephant calf were hunted. The process of the hunt can be imagined as the hunting of elephants in old movies. More men throw the spear in one moment and the mammoth is paralyzed and dies. Although, it´s possible that the hunt used to be a sacred ceremony with special regulations and rituals. It´s not necessary to point out, that the old idea of hunting the mammoth with the help of a trap ditched in the ground is a complete nonsense. In this time, the ground was always frozen (permafrost) and digging of the pit would be very difficult. 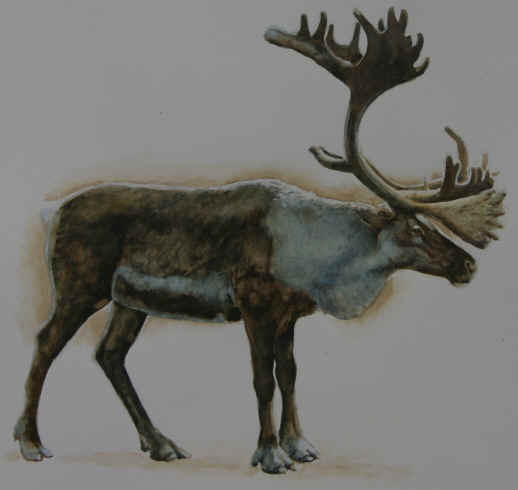 Reindeer is a typical animal of the northern regions. Reindeer live in herds, migrating long distances in order to find food. Their fur is an outstanding insulation against the Arctic temperatures. They breathe cold air by means of three lungs. Female reindeer have antlers as male ones. People either hunt reindeer or keep them as semi-domesticated animals. In the latter case, a reindeer is a source of milk, meat, fur, antlers and meat, and it is also used as a draught animal. Their winter hairs are hollow and incredibly warm. The products made of the reindeer fur shed the hairs easily and that is why they have to be changed frequently. The oldest culture specializing in utilization of reindeer in Moravia was documented in the Kůlna Cave in the Moravian Karst. The reindeer bones were the most frequent among all bones found there. It was a 40,000 year-old Micoquian culture, and their bearers were the Neanderthals. The remains of reindeer were uncovered also on the Gravettian, but above all on Magdalenian archaeological sites. On the Gravettian archaeological site Lopata in western Slovakia there was unearthed a complete reindeer, buried 23,000 years ago. It may suggest that that population of the Kostenki-Willendorf culture was closely interconnected with reindeer. 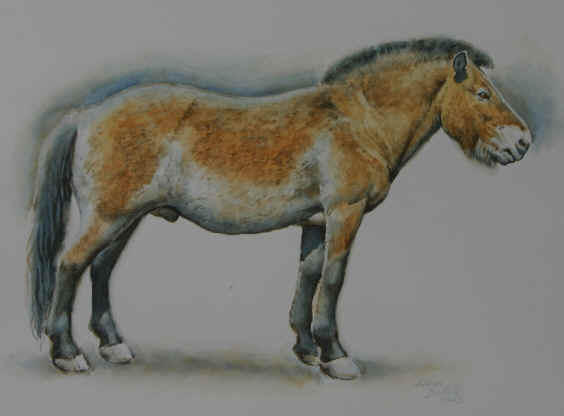 In the Pekárna Cave in the Moravian Karst there was unearthed an animal’s rib with an engraving of three horses. The horses are leisurely grazing and watching the surroundings in the same way as wild horses today. Horses were commonly hunted animals in the Palaeolithic, some ethnic groups even specialized in their hunting. Some Magdalenian horse figurines had small holes and ornaments in the place where there is usually a bit, which denotes a possibility of horse riding. Moreover, there were discovered some signs of teeth wastage as if from bits in the horse skulls from these times. Horses were the most frequently hunted animals in the Scheningen locality in northern Germany 400,000 years ago and probably in the Moravian transitional cultures 45,000 years ago (40,000 RCYBP). Hunting of horses was also common in the Aurignacian culture and it was documented in the post-Aurignacian archaeological localities as well. Some populations of the Magdalenian culture were also closely interconnected with horses. 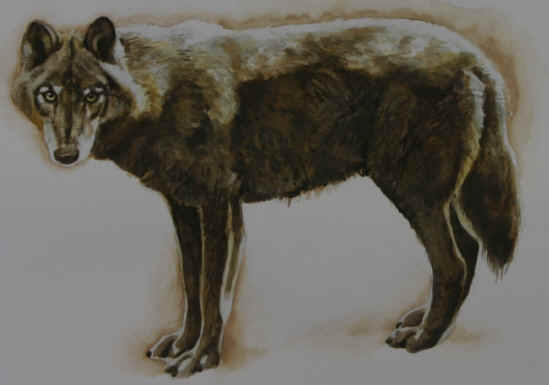 Wolves are social animals, they live in family packs led by a dominant pair. They are very good runners controlling large territories where they hunt for ill and old animals. They are even able to subsist on rodents, which make up the major part of their diet in certain places and at certain times. Wolves take advantage of their excellent sense of smell and an incredible ability of long-distance running. Their good mental abilities help them to solve complicated situations that occur during hunting quickly, and they can be also seen in their mutual relationships and their techniques of controlling their territories. Young wolves are very playful and easy to tame, and it follows that in the hunter societies of the Upper Palaeolithic tamed wolves helped to guard dwellings and their inhabitants, they were companions during hunting expeditions and they could also be used as draught animals. The ratio of wolves to herbivores is usually several per cent (about 3 %) in the nature. Nevertheless, in some Palaeolithic camps (including the Neanderthal camps) there were unearthed strikingly large amounts of bones of wolves. It was in case of the Kůlna Cave in the Moravian Karst, which was inhabited by the Neanderthals of the Micoquian culture 45,000 years ago (40,000 RCYBP). High ratio of bones of wolves was also found in some Gravettian settlements of Moravia. 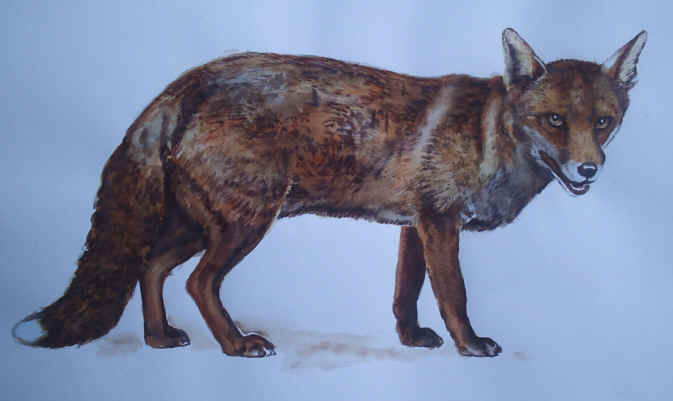 There were found bones of both red and polar foxes on the Palaeolithic archaeological sites. Sometimes it was difficult or impossible to distinguish between the two species according to the remaining bones. It is interesting that some species were surprisingly able to survive even the cold climate of the Gravettian, for example, bones of roebuck were unearthed in the Gravettian site Moravany nad Váhom in Slovakia. It was probably due to the fact that the ice ages were not uniformly cold and in some favourable places there were refugiua of thermophilous vegetation, as we could see, for example, in Siberia today. The red fox is a very persevering and rapidly breeding carnivore. Fox belonged to the trophy animals of the Gravettian of Moravia (the Pavlovian culture). Small, drilled canines were used as a decoration of the caps in the famous triple burial of Dolní Věstonice. There were also unearthed bones of young foxes without any value for the then people. It points to the fact that small animals (e.g. foxes, hares, ptarmigans) were hunted using traps, as we could see it in Siberia now. 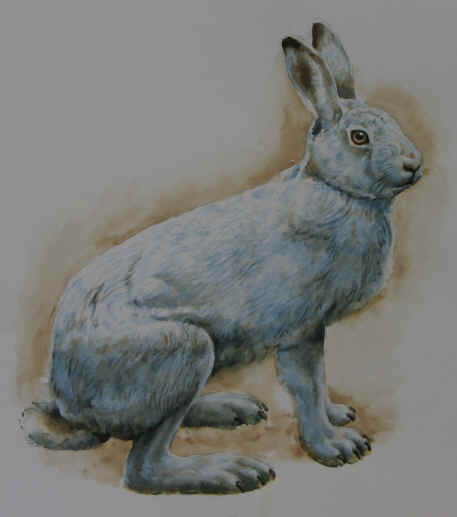 The common European hare of the Upper Palaeolithic was the mountain hare. When the Ice Age ended, mountain hares found their refuge either more in the North or in the high mountains. Hares change their fur from brown to white or grey for winter. They dig burrows either in soil or in snow. Their burrows function as shelters for the young, mature animals practically do not use them. Probably the highest ratio of the bones of hares has been documented in the settlements of the legendary mammoth hunters, e.g. the people of the Pavlovian culture. Hares were so important for them, that the mammoth hunters could actually be also dubbed as the hare hunters. 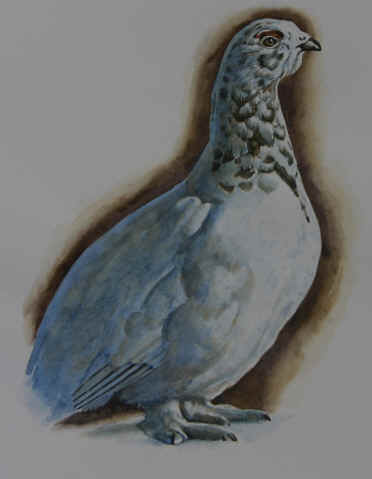 Ptarmigans belong to the Tetraonidae family together with grouses. They are well adapted to the cold climate, as their feet are feathered, too. Their winter foods are mostly parts of a dwarf birch. They have a white plumage in winter, except for a black tail. They moult after winter and their plumage is partly brown during the warmer period of the year. The first bird hunting culture in Europe has been documented in Moravia, in the Stránská skála site in Brno, more than 600,000 years before present. The then inhabitants of Central Europe hunted mainly waterbirds using two-pointed throwing rods, 70 – 80 centimetres long. Also in the era of the great cultures of the Northern-type hunters of Europe and Asia we could see an interest in birds, which was reflected in the art of creating figurines and engravings of swans, owls, grouses, auks and other attractive birds.

The Gravettian of Moravia – the Pavlovian

The Prehistory for kids - Antroparkbaby

We are looking for a sponsor for the next operation of the Antropark and the emergence of new reconstruction.